A few days ago I was at something called “klädbytardagen” here in Sweden where I live. I don’t know if there’s a generally used English name for it, but it translates to something like “clothes swapping day”.

The concept is pretty simple, instead of buying new clothes you swap clothes with each other.

For every piece of clothing you give away you get a ticket, the ticket can then be traded with another item there. There’s usually a maximum amount of items you can give away and at today’s event it was 10 items each. Everything that doesn’t get a new home goes usually to either charity or to a secondhand store. 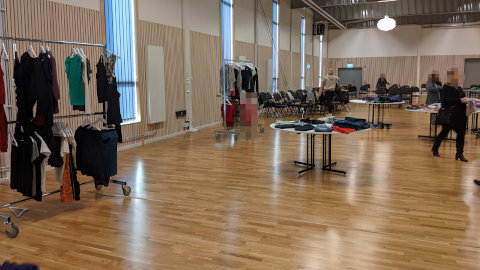 I had a lot of fun and I ended up with a bunch of good kids clothes which was nice. I do wish that more guys would attend these kinds of events. It’s usually uncommon to see guys and that makes it rather difficult to find anything for myself and other guys. It’s a lot easier to find clothes for women and kids. 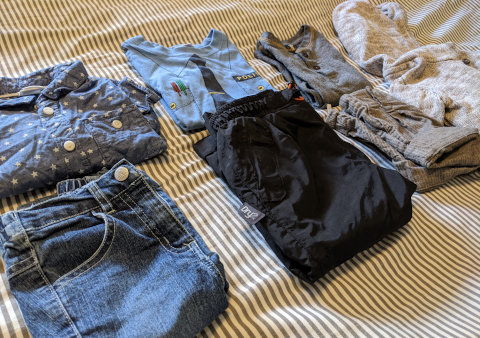 My findings of the days was a bunch of kids clothes.

I think this is a great way of updating and refreshing your wardrobe without it costing you any money and more importantly; it’s not impacting the planet with any additional carbon dioxide.

Most of those clothes are perfectly fine and could have come to good use for a lot of people, especially for those who’s not fortunate enough to afford new clothes.

The bad thing with wealthy countries is that they have too much money to spend on things they don’t really need to begin with. Swedes is especially good at overconsumption junk we don’t really need. And for some reason a lot of us seems to think that it’s okay to do a lot of shopping as long as you give away your old items to second hand.

What we need to do is to buy way less new stuff and way more of the used and perfectly fine things out there. We need to start to think about tomorrow and what future that lays ahead of us if we continue down the unsustainable path we’re currently on.