It’s been exactly four years since I built my last keyboard. It has been a good keyboard that has served me well over the years, but it was time for a long awaited upgrade. I’ve been waiting for any keyboard switch manufacturer to release a light, linear and smooth switch, preferably at an affordable price. And that’s exactly what Gateron recently have done. Finally! 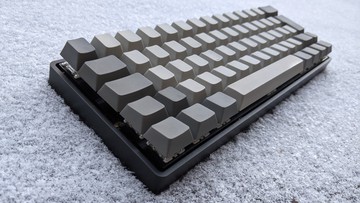 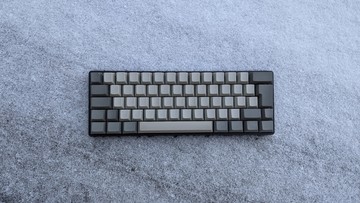 It’s—relatively speaking—an economical build. I haven’t counted the total sum for it, but I think it ended up slightly above 200 EURO. Which I consider to be a excellent price for a high quality custom-built keyboard that both sound good and feels buttery smooth to type on.

The PCB is called Aves 60. It’s a hotswap PCB with an ISO-layout and a split right Shift-key. Hotswap means that it’s basically ‘plug and play’. There’s no soldering required as it is with a ‘regular’ PCB. While soldering the switches is okay, de-soldering them without proper (read: expensive) equipment it’s time-consuming and everything but pleasant work. That’s why I’m rather excited about my first hotswap PCB.

The Aves 60 is currently just a prototype to make sure that it was designed correctly and that everything works as expected, which it does. This means that we’ll move on to production soon and it should be available in the stores in a few months from now, if everything goes according to plans.

Support for VIA and VIAL

The Aves 60 and the Aves 65 both support QMK, VIA and VIAL. Which is also great news for me! I have until now, used a PCB called S60-X from Sentraq. It’s an old model that’s only supported by QMK. And unfortunately, the physical ISO-layout that I use, isn’t supported by the graphical configuration tool for QMK. This means I’ve been editing the source code, compile the source code and then manually flashing it, whenever I’ve made any changes to my keyboard layout.

This is all in the past now! With VIAL—which is an open source version of VIA—I can program my keyboard in real-time using a graphical application. This means that I can point and click using my mouse and any changes that I make are instant. 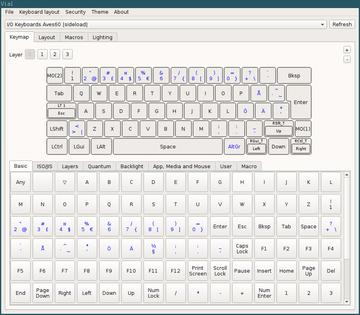 This is VIAL, the tool I used to configure my new keyboard in real-time.

I haven’t done that many changes since I last wrote about my custom keyboard layout a couple of years ago, but if you haven’t read that post, I highly suggest you doing it, especially if you’re new to compact and custom keyboards.

I went with a new switch from Gateron named “G Pro White Linear Silver”. It’s a linear switch that actuates at 37 gf (grams of force) and bottoms out at 45 gf. This makes them into a—really—light switch. They’re probably way too light for most people. 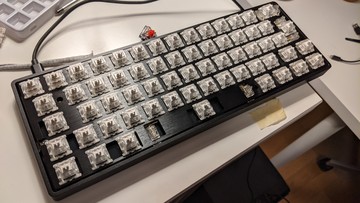 My keyboard build in progress.

This switch is factory lubricated, which makes them buttery smooth with a more muted sound. If you haven’t listened to a lubricated high quality keyboard before, I can highly suggest that you do it right away.

The price for 70 switches was about 20 EUR (excluding VAT). This is a good price, especially considering the fact that I’ve spent a lot more on some hyped brands—that even after modifying them—would still not perform as good as these.

There’s not much to say about it. It’s a black, simple and it gets the work done. It sounds a lot better after some sound dampening material in the bottom.