I’m a Swedish eco-friendly {minimalist,slow-tech} philosopher and a creative person with a large passion for computers and pretty much everything surrounding computers.

I’m a strong believer in ethical and libre software, as well as in the UNIX-philosophy, the KISS-principle and the “worse is better“-concept. Philosophies and concepts that I consider them to be inspiring and healthy approaches to both software and as well as life itself.

My life outside my computers is a rather disconnected slow-tech lifestyle. I really don’t own any technology other than the most basic things like my computers, my TV and my smartphone. I do my best to live a healthy minimalist, sustainable and low-tech life as possible.

I enjoy being creative and creating things (which is mostly graffiti and baking these days), traveling (almost exclusively domestic) and experiencing new places, food and people. I also like long walks, jogging and cycling. Staying healthy is one of the most important things for me, which is partly why I don’t consume any form of tobacco or alcohol at all.

My history with Linux

My journey with Linux based operating systems started the year after I got my very first computer, back in 2006. It was a friend who gifted me a printed copy with Ubuntu 6.06. It was back when you could still order free copies of any Ubuntu flavour from Canonical.

I sticked with Ubuntu for several years. I was also quite deeply involved in the Ubuntu community, especially in the Swedish community (when it was still alive). And in 2009 I was granted an Ubuntu membership for my contributions to Ubuntu.

I later switched to Arch Linux (pre-systemd era) back in 2009 or 2010. I was feeling a bit bored with Ubuntu on the desktop and its six months release cycles. I also wanted something more challenging. Arch Linux was a fun challenge and I enjoyed using it, even though I had some issues with it when they (without any warning) jumped to systemd as their default init in 2012.

In 2016 I had gotten tired of Arch Linux in multiple ways. I was looking for an alternative that resonated with my philosophies and something that had a friendly community. I ended up with Gentoo, and that’s what I’ve been using ever since. I even wrote a post about why I like Gentoo in 2020.

I’ve been using the same online alias “Hund” and the same profile picture for a long time now. The name “Hund” is the Swedish word for dog. I happen to like dog. A lot!

If I’m not mistaken, the first time I used the username “Hund” was when I created my account at the Swedish Ubuntu forums back in January 2007.

The profile picture followed not long after the username. My profile picture is a photo of one our many dogs sitting in a bathtub with a dummy in his mouth. I don’t know why, and I’m not even sure who took the picture to begin with. 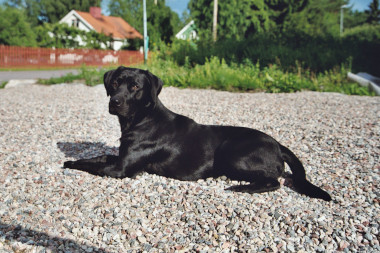 His name was Atlas and it was my best friend. Adn even as an adult, he—always—wanted to sit in my lap. Unfortunately, he passed away of old age back in 2015. I miss him every single day!